Carlos Rancaño, in his solo exhibition at The CAMP Gallery: Intimacy and Introversion offers a narrative of sensual poses, introspective moments laced with symbols created in 2020 and this year documenting the resilience of both the artist and his subjects. Outwardly the works and the poses often suggest the sensual, as the majority are nudes, but that is just the superficial layer to Rancaño’s work—always beneath the many layers also lie the many levels of personality, the often struggle between the private and the public, and the trepidation of individuality in a conformist society.

Figurative art has often been linked to the school of realism with its focus on presenting both the truth and the science of things, Rancaño adds to this by adding the psychological of the internal. When discussing his works, it is not unusual to hear the artist say that while painting he is actually able to see a person in a new and different light, in their elements and how they combine with personality, to make the individual. This is especially true of the last piece for the exhibition Jack of all Kings (above), which is a portrait of the artist’s brother.

Rancaño explains, “I really enjoyed painting this piece because in the process of creating it I realized that I never really stopped and looked at my brother’s face…” What is also apparent in the piece is the artist’s feelings for and about his subject, his brother: by crowning him we are able to understand where his brother fits in the hierarchy of the artist’s life, but also how the artist feels about his brother. 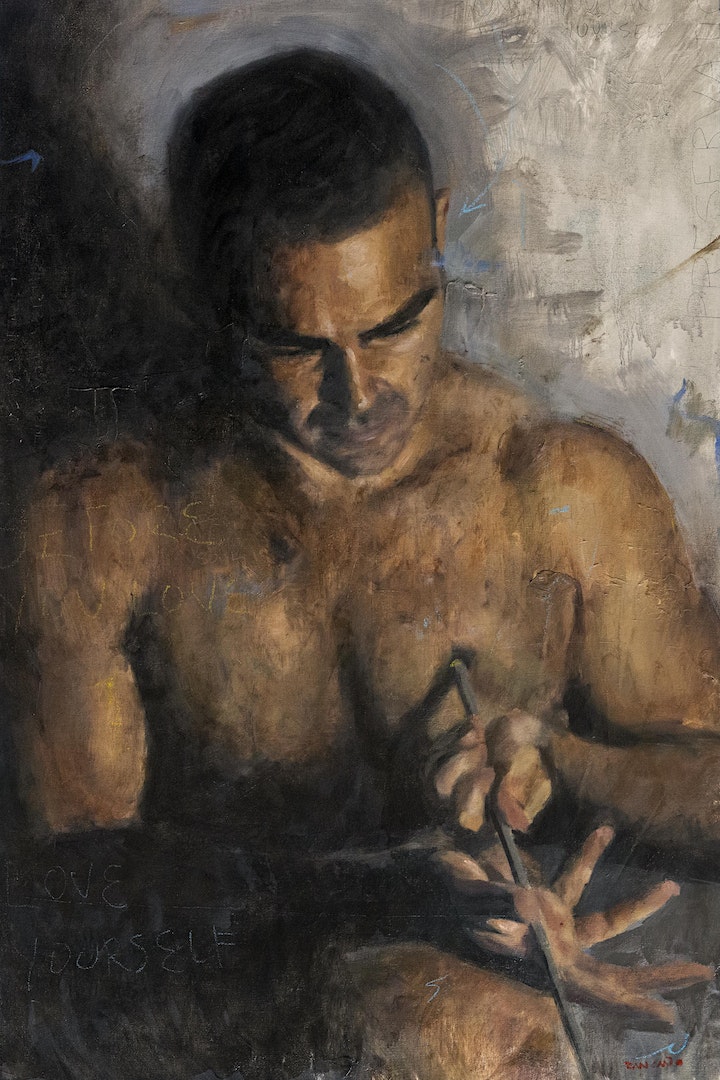 Adding ‘props’ or symbols, that one believes evolve and enter into the work as Rancaño stands before his easel, or will add a further quality to the work and the artist’s interest in personality. Looking at the expression of his subject in Guarded, one clearly understands that the pensive face before us, not engaging with us, is guarded, which is reinforced by the arms. What is interesting, though, is that by adding the boxing gloves, we understand that not only is she guarded, but she also has the ability to protect herself, something the artist has understood and has now empowered her to do.

If ever you watch Rancaño while he paints, you will appreciate another layer of interest to his work, which is the application of paint and his brushstroke. In the early stages of his work, there appears to be an explosion of application and drips, which initially liken themselves to the semi-chaotic school of abstraction, but with each layer, Rancaño tames that explosion resulting in the private moments caught in all his works. This painterly manner also enhances the idea that these are not traditional figurative pieces, but the exploration of the private against the public, and like we all have to—one must go through the challenge and end up clearing out the noise, the distraction to arrive at a plane of acceptance.

Carlos Antonio Rancaño was born in Miami, FL. from Cuban/Panamanian parents. After graduating Cum Laude from MIU with a Bachelors Degree in Graphic Design, he started his career in Advertising. Even though he was always keen on drawing, it was the strict rules of design that gave way to his paintings. The free spirit that lives in his work is a direct response to the more simplistic approach of Graphic Design. His work is saturated with bright, warm colors and sharp, rigid brush strokes serving as a pedestal to the subjects in his work. Spreading from an array of themes, like bold portraits of women to African child soldiers, his work is never well-worn. Carlos Antonio has participated in various exhibitions across South Florida, as he continues to establish himself as a premier artist.